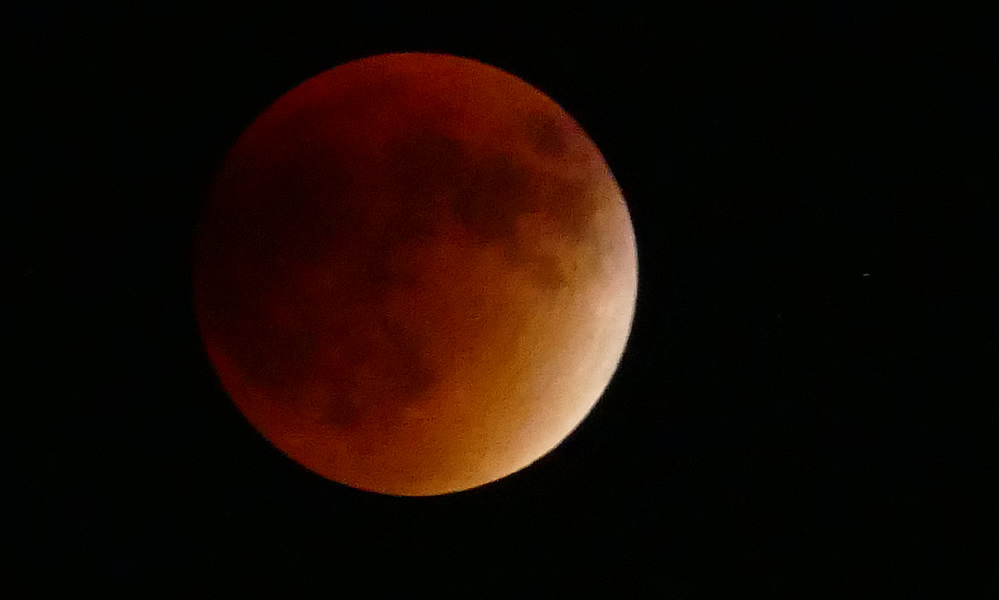 9/28/2015 | As USA Today put it, “It almost sounds like something from a comic strip: A total supermoon lunar eclipse, also known as a blood moon — supermoon.” This is real, and by the time you read this, it happened in its fullness on Sunday, Sept. 27, 2015, lasting until early Monday morning.

Why is this worth writing about? Well, this particular phenomenon seldom happens. The last time was 1982 and the next time will be in 2033. It was also visible during prime time. You did not have to wait until 3 in the morning to catch a glimpse.

The blood moon is a confluence of three things. First, there is a full moon. Second, the full moon happens to be at the closest point in its orbit around the Earth. This is called a supermoon because it is 14 percent larger and 33 percent brighter than other full moons. Third, there is a lunar eclipse. This is when the Earth lines up directly between the sun and the moon, and the moon is completely in the shadow of the Earth. The debris and light reflections from the Earth’s atmosphere reflect a reddish color on the moon. Therefore, it’s been called the blood moon.

Wait – there’s more. There are a lot of speculations that the combined supermoon and lunar eclipse is a recipe for world disaster – an apocalypse . This particular supermoon-blood moon is said to be the last of a “tetrad,” four consecutive total lunar eclipses, each separated by six lunar months, that took place on Jewish holidays. The first three in the current series took place April 15, 2014; Oct. 8, 2014; and April 4, 2015. There is also a link between the tetrad and key years in history, such as 1492, the expulsion of Jews from Spain; 1948, the birth of Israel; and 1967, the Six-Day War. Each tetrad year appears to have significance. I’ve only mentioned a few.

We have been watching the skies for thousands of years, creating mythology and connecting the Earth to the universe with our legends and stories. The coincidence with Jewish holidays and the tetrad is logical, since the Jewish calendar is a lunar calendar. Then there are the significant historical years. Yet this could possibly be an example of confirmation bias. Confirmation bias occurs when we look for connections that fit pre-conceived notions.

This is an alignment of the Earth, sun and moon that happens to occur when the moon is at the closest point in its orbit. For those with clear skies and possibly binoculars it was a gorgeous sight – an historical event since it happens so infrequently. Remember the last one was in 1982 and the next one won’t be until 2033. Is it a message from God? I happen to believe so. Is it a message of imminent pending disaster? I am not convinced.

The message I get is that we – the Earth and the Earth’s inhabitants – are connected to the universe. The universe is powerful, spectacular, and majestic. I interpreted from this event that we have a responsibility. Our responsibility is to be mindful of our precious Earth. Each of us in our own way need to do what is within our power to act in harmony with our surroundings, our community, and our mother planet. Maybe I am too simplistic, but I take it as a very strong message.

I am not saying that things are hunky-dory in the world today. We have economic stagnancy in Europe. We have a slowdown in economic growth in China, and a volatile stock market. These things aren’t going away overnight. I am saying that the correlation with these things and the blood moon-supermoon is simply a dramatic conjecture. I bet if I did the research I could create my own confirmation bias that links the blood moon-supermoon to historically good things. So, first, I hope you were able to see the blood moon-supermoon and revel in the majesty of our universe. And then I want to wish upon you many blessings and good things in the weeks/years to come.